The 10 Most Famous Racehorses of All Time 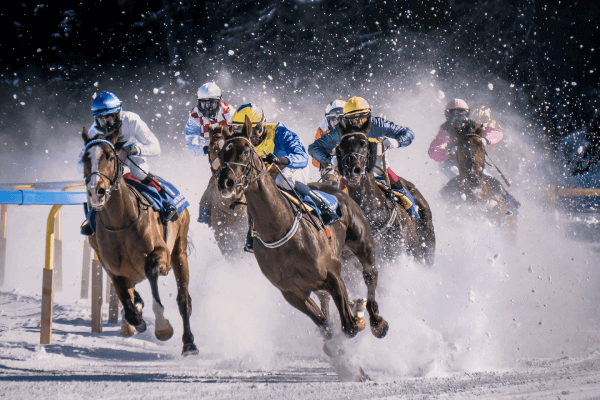 Horses are truly majestic creatures, and anyone who’s ever seen them race can testify to that. With that in mind, it’s easy to see why they’ve been the subject of many a movie over the decades. Although some of them are based on the life of real equines, history is filled with famous racehorses whose names are slowly being forgotten. That’s why we’ve put together a list of 10 names that any horse racing fan should know.

Flying Fox was a British Thoroughbred racehorse who came from a remarkable male line developed by Hugh Grosvenor, 1st Duke of Westminster. The colt was notoriously difficult to handle, so his racing career wasn’t a long one – it only lasted for two years. What’s interesting is that Flying Fox’s dam, Vampire, had an even worse temper than he did, which almost made the Duke get rid of her.

At age two, this famous horse won three of his five starts and, at the age of three, went on to win the Triple Crown (Two Thousand Guineas, Epsom Derby, and the St. Leger Stakes). His last race was the Jockey Club Stakes at Newmarket, in which he also came in first.

On April 1, 1764, a solar eclipse swept across Great Britain, and during this celestial event, a horse was foaled at the Cranbourne Lodge. Because of this, the colt was named Eclipse. As though the unusual circumstances surrounding his birth were a kind of sign of what’s to come, Eclipse became one of the greatest racehorses of all time. Out of the 18 races he won, eight of them were “walkovers,” as there were simply no horses that could even attempt to beat him. In fact, it’s said that Eclipse never actually got to show off his full potential on the race track.

You might have heard of the old saying: “Eclipse first, the rest nowhere”, which is apparently the bet that Denis O’Kelly, Eclipse’s second owner, placed in 1769. At the time, this meant that no other racing horse would finish within 240 yards of the winner. As you can already guess, O’Kelly’s prediction was correct.

Speaking of incredible stories, our list of famous racehorses would be utterly incomplete if we didn’t include Red Rum in it. Red Rum was bred for one-mile races, and the fact he was born with a debilitating and incurable bone disease made it unlikely he would ever achieve much. However, he ended up exceeding all expectations.

Red Rum became truly successful only after Ginger McCain started training him. His approach was unique in that he ran the horse on the sands at Southport, England. It’s believed that this proved highly beneficial to Red Rum’s hooves as this legendary horse won the Grand National – an exceptionally difficult horse race over a distance of about 4 miles and 514 yards – two times in a row (in 1973 and 1974) and then again in 1977.

It would be hard to find a single person on the planet who hasn’t at least heard of the name Seabiscuit. The reason why the stallion has been featured in a number of books and films – thus becoming one of the most famous racing horses in the world – is that he defied every notion of what a typical racing horse should look like. His knees were bucked, meaning they bent forward instead of being straight, the cannon bones on his rear legs were too long, and he was considered undersized. What’s more, Seabiscuit lost his first 17 races.

Eventually, Tom Smith was assigned as Seabiscuit’s trainer and turned him into the hugely successful racer we know of today. Up until the 1940s, he was an all-time leading money winner among racehorses everywhere.

Even among famous horses, Secretariat is known as an exemplary Thoroughbred. Due to his large size and chestnut coat, he was affectionately called “Big Red”. Secretariat was born to a Virginia stable on the brink of getting sold because its owner, Chris Chenery, became ill. However, his daughter Penny believed that the family farm could be saved, and luckily, that turned out to be true.

During his career, Secretariat won five Eclipse Awards, which was named after our #9. His accomplishments also include setting speed records in all three Triple Crown races, earning him a place among the best racehorses in the world. Secretariat’s most awe-inspiring victory was in the Belmont Stakes when he won by 31 lengths!

Top achievement: Winner of 19 stars in a 20-race career

Zenyatta is a retired racehorse mare of monumental size. Reportedly, at maturity, she was between 68 and 70 inches high at the withers, and she had an estimated stride of 26 feet. Zenyatta is an extraordinary calm horse that never failed to start a race late, which made her spectacular results all the more remarkable. Her one-of-a-kind prerace “dance” contributed to her becoming one of the most famous racehorse mares. That’s why warming her up like a regular horse was simply counterproductive.

Before she stopped racing in 2010, Zenyatta left quite a mark on the world of horse racing with her numerous triumphs, including her win at the Breeders’ Cup Classic, which made her the first mare to win it.

Citation’s single best season was 1948, which is, unfortunately, the same year his jockey, Albert Snider, drowned. Snider was replaced by Eddie Arcaro, who is regarded as the greatest jockey in the history of American Thoroughbred horse racing.

Top racing horses are usually the offspring of horses that have themselves previously been successful on the race track, but Citation’s parents actually weren’t very distinguished racers. Nevertheless, the gamble paid off, and the colt bred from Bull Lea and the imported mare Hydroplane II grew up to become the winner of 16 consecutive major stakes race competitions.

Top achievement: Won the Triple Crown without having lost any previous races

It’s been said that Seattle Slew wasn’t a particularly attractive foal – so much that his first nickname was Baby Huey. However, throughout the years, he matured into a graceful stallion, whose acceleration capabilities were often compared to those of a falcon diving.

Believe it or not, this famous racehorse was purchased for just $17,500 back in 1975 at the  Fasig-Tipton yearling auction. With that in mind, it’s difficult to believe that just two years later, he walked off with the title of a Triple Crown champion with a perfect career –  the only other horse that accomplished this feat was Justify, Seattle Slew’s descendant. That same year, in 1977, Seattle Slew received the American Award for Horse of the Year.

Man o’ War is by many considered to be the greatest racehorse ever, but not everyone knows that had it not been for his owner’s protectiveness and a race starter’s mistake, he probably would have left an even more significant mark on the horseracing history. Out of fear that the horse was too young to run the 1 ¼ mile distance, Samuel Riddle decided not to enter Man o’ War into the 1920 Kentucky Derby. In addition to that, Riddle retired him at just three years of age.

The widely debated 1919 Sanford Memorial race is the only blemish on the otherwise perfect record of this top racehorse. As there were no starting gates in the early 1900s, horses lined up behind a piece of webbing. Although it was never officially confirmed, it was reported by multiple sources that Man o’ War hadn’t reached his position when the barrier was raised.

After 37 long years, US horse racing fans finally got another Triple Crown champion in 2015, and, as though that wasn’t enough, American Pharoah won the Breeders’ Cup Classic as well. He is the first horse in the equestrian annals to do so.

Secretariat is one of several famous racehorses that appear in American Pharoah’s pedigree. While some think that Secretariat is too far back in his great-great-great grandson’s lineage for it to matter, there are those who believe some of his skill lives on in American Pharoah. The stallion was retired in 2015 and can currently be found at Ashford Stud in Kentucky breeding mares.

Who is the richest jockey?

Currently, Yutaka Take is the highest-earning jockey in the world. It’s estimated this Japanese jockey has amassed about $796 million during his impressive career.

How did Seabiscuit die?

Seabiscuit, one of the most famous horses in history, most likely died of a heart attack six days before his fourteenth birthday.

What are the 4 major horse races?

The four horse races of most relevance to jockeys and horse race enthusiasts are the Kentucky Derby, the Preakness Stakes, the Belmont Stakes, and the Travers Stakes. The first three are also known as the Triple Crown, while the informal name of all four of them is the Grand Slam of Thoroughbred racing. If a racehorse wins the grand slam, the win is often referred to as the superfecta.

Is the movie “Seabiscuit” historically accurate?

Even though the 2003 movie “Seabiscuit” does tell a captivating based-on-a-true-story story of one of the most famous racehorses in history, there are several inaccuracies in it. Most of them can be explained by the director’s wish to create a more dynamic narrative at the expense of historical accuracy. The movie is a symbolic portrayal of just how much Seabiscuit meant to those living in the United States during the Great Depression.