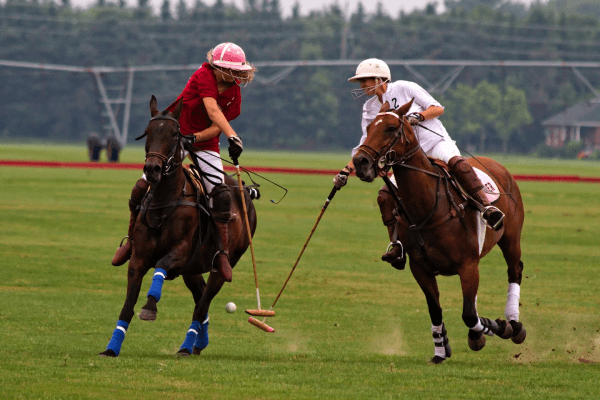 Origins and Evolution of Polo

1. Polo is older than Christianity.

Polo is an ancient game, played in one form or another for well over 2,000 years. The general scientific consensus is that the origins of the game can be traced back to the 6th century B.C. Eurasian nomads played polo while training for war, with the first games recorded in Persia before rapidly spreading east to China, India, and west to Constantinople. The modern version of the game reached Europe following British conquests in Asia.

2. The game can be played using many different animals.

Although polo is a horse sport before anything else, many other variants of the game existed throughout history. Some are still played to this day. So what is polo like when played atop of a majestic elephant? You can find out by traveling to India, Nepal, or Thailand, where this unique adventure sport is highly popular. Meanwhile, Arab monarchies in the Gulf, not too far from where the earliest horse polo games were played, add their one distinct twist to the game with camel polo. There are also donkey and yak versions, and a polo pitch can be anything from grass and sand to snow.

3. Polo teams used to be much larger, and women were prominent players.

Today’s polo rules, which became mainstream through the British takeover of the sport, govern many aspects of the game. And while there are plenty of female polo players, most modern games are played by two teams of four men on each side.

In contrast, ancient matches had far less strict polo rules, and teams could field as many as 100 players each in epic, wargame-like scenarios. Women were also prominent players, as evidenced by Shīrīn, the wife of Sassanid king Khosrow II. She not only loved the game but had a female-only team that competed regularly against her husband and his courtiers.

Al-Nasir Salah al-Din Yusuf ibn Ayyub, better known as Saladin, was the first sultan of Egypt and Syria and a man who loved handing Crusaders embarrassing defeats and playing Polo with his elite guard. The first Muslim Emperor of North India, Sultan Qutb-ud-din Aibak, ruled for only four years on account of a tragic polo accident in 1210.

5. One Chinese Emperor beheaded an entire polo team, while a noblewoman was buried with her favorite polo donkeys.

Polo has a long and storied history in China. It was introduced to the empire when Iranian nobles fleeing the Arab conquest of their lands sought refuge there. Among the many interesting stories, one that comes from 910 AD stands out. Emperor Abaoji was a big fan of the game, often hosting lavish matches with his courtiers. When one such match resulted in a tragic loss of a dear relative, he ordered all remaining players to be beheaded immediately.

Anyone who plays polo these days would scoff at the notion of replacing noble horses with mere beasts of burden such as donkeys. Tang Dynasty noblewoman Cui Shi begged to differ. Lvju or Donkey Polo was a popular sport among Chinese women during this period, and the wife of famous general Bao Gao was an especially dedicated fan.

6. The legendary Polo shirt and pants were brought over from India.

Although many believe that the famous button-up shirt was invented in 1920 by British player Lewis Lacey, the truth is that the design was first conceived in the late 19th century in India to prevent the collar from flapping while on horseback. Along with another famous clothing item, the Jodhpur pants, Lacey simply introduced the polo attire to the broader British public and cemented it in polo history. Over time, both of these practical pieces of clothing would become fashion statements.

7. Divot stomping may look silly, but it helps both players and horses.

The strange-looking tradition involves spectators marching onto the field to socialize during halftime at polo matches. Aside from allowing the audience to mingle and play a more active role in the game, this also helps smooth over mounds of earth called divots which the horses previously stomped on. It benefits both players and horses while minimizing the risk of injury.

8. One of the world’s poorest cities houses the oldest still active polo club in the world.

Throughout the long history of polo, the game became known as the sport of kings. It is, therefore, somewhat ironic that Kolkata, one of the world’s poorest cities, houses the longest-running polo club. Formed in 1862 by British soldiers, Captain Robert Stewart and Joe Sherer, the club also hosts the world’s first and oldest polo trophy, the Ezra Cup (1880).

9. Polo can only be played with the right hand.

We already touched on the ancient polo origins that date back to the 6th century B.C. The modern game’s rules are much less lenient, and a key element of those rules is borrowed from knightly jousting duels that later inspired highway traffic rules. Two riders approaching each other from opposite directions would run a real risk of dangerous head-on collisions if both didn’t use the same hand when catching a lance or controlling a polo ball.

10. Modern polo ponies are not really ponies at all.

Famous polo horses are often erringly referred to as “polo ponies.” In reality, these noble beasts are often a mix between pure thoroughbreds and quarter horses. They are most commonly purpose-bred for polo, making for a horse with agility, strength, and speed. If we go back to the origins of polo, thoroughbreds were a common sight in Persia. Later on, both the Eurasian steppes and players in the British Commonwealth preferred short stubby ponies. Over time, the advantages of these two gave birth to the modern hybrid horse.

If you aren’t interested in mounting a horse or being seen on the lawn just yet, you can always place a bet on a polo game. Of course, if you’re looking for an adventure that transcends continents, this great game pioneered by Persian kings and Indian rajahs handed down to the idle rich won’t leave you disappointed.

Who invented the game of polo?

There is some debate about who invented polo and when, but variations of the game can be traced back to the 6th century B.C. The general consensus is that ancient Persians invented the sport as a form of training exercise for their elite cavalry units. Polo was very popular in Arabia and India before spreading to the rest of the world predominantly through British colonial influence.

Why is polo called polo?

Despite being known as the sport of kings, the name itself originates from humble beginnings. It is a transcription of the word “pulu,” which means ball in the ancient Balti language spoken in India and Pakistan.

What are the basic rules of polo?

Polo game rules share some characteristics with many other team sports. Two teams of four polo players compete to score the most goals within four chukkas (plays) that last seven minutes each. A typical polo field is 300 yards long and 160 yards wide, while goalposts are eight yards apart.

Why is polo so dangerous?

There are a number of reasons why playing the sport can cause serious injuries to even highly trained riders and horses. For example, horses running around at high speeds while bumping into each other, polo mallets being swung wildly, and polo balls traveling at high speeds can all result in bodily injuries.

Is it expensive to play polo?

Yes. Out of all polo facts that we could throw at you, this one is the most obvious. To start with, polo equipment and a thoroughbred polo horse cost a lot of money. Moreover, every polo player needs to be an excellent rider, and professional riding lessons aren’t cheap.