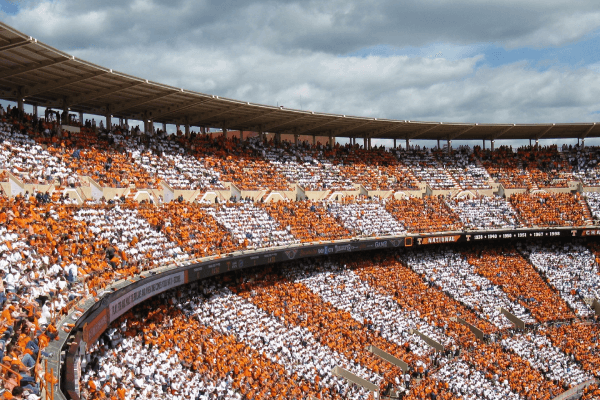 It’s no secret that the professional sports industry is, in general, extremely profitable. Some estimates put the valuation of the sports market in 2021 at about $440 billion. Its worth should continue to rise, reaching nearly $600 billion in 2025. This is a tremendous amount of money, prompting numerous discussions on whether there’s too much capital in sports and if the industry should be financially ‘deflated’ to preserve the spirit of athleticism.

In this article, we’ll take a look at the most profitable sports leagues as well as the general causes that led to those leagues generating such substantial revenues. Whether you feel that professional sports revenue statistics have spiralled out of control or not, the COVID-induced cancellation of most sports events in 2020 proved that this industry is a crucial source of fun and comfort for many, without which we just can’t get by. When sports were lacking, most people turned to online poker or other casino games to pass the time and find solace. Let’s see what the biggest sports leagues are and just how much profit they rake in.

The National Football League (NFL) has long been at the top of the list of the most profitable sports leagues in the world. This doesn’t come as a big surprise to anyone, as American football is incredibly popular in the US and the NFL holds 26 out of 50 world’s wealthiest franchises. The world’s most valued sports team also belongs to the NFL – the Dallas Cowboys, with a valuation of $5.7 billion. The second-placed team by valuation are the New York Yankees, an MLB team whose value has been put at $5.25 billion. The NFL revenue for its sports teams is unmatched by any other league.

The NFL’s first-place spot among the most valuable sports leagues hasn’t been usurped even after the NBA increased the average value of its teams six times over a decade.

However, not everything is jolly over at the NFL. The league’s revenue counted $16 billion in 2019, but the pandemic dragged the 2020 revenue down to $12 billion. 2020’s Super Bowl was also a flunk. Besides losing substantial funds usually generated via match tickets, it accrued only 96.4 million views – the lowest viewership since 2007.

TV rights form a considerable portion of the NFL’s revenue. With the league’s previous airing deal worth $6.5 billion per year and 73 out of the top 100 broadcasts of its events in 2019, NFL cemented its No. 1 place when looking at sports leagues by revenue.

Before you shed any tears for the NFL’s 2020 woes, you should know that the NFL recently secured a $110 billion, 11-year TV rights deal with Amazon and many other broadcast networks. With the pandemic hopefully receding, the most–watched sport in America should regain past glory.

The National Basketball Association (NBA) didn’t go through the pandemic unscathed either. According to the reports, these deficits included an $800 million loss in gate receipts, as well as $200 million lost in merchandise and sponsorships. However, even with these losses, the NBA retained its position among the most profitable sports leagues.

Politics also affected the NBA’s bottom line, as Daryl Morey’s tweet supporting the Hong Kong protests led to the unravelling of partnership deals with China. This, in turn, resulted in a $200 million net negative impact for the NBA.

However, both NBA teams and players have generally enjoyed a period of constant growth over the last few years. As mentioned earlier, the value of NBA’s teams has increased nearly six-fold over the course of 10 years – a far greater pace than in any other US sports league. The NBA revenue for players is also on the rise.

During the 2019-2020 NBA  season, the players’ salary cap was $109 million, making basketball one of the most profitable sports. If the salary cap formula had been based on the overall league revenue, the cap would have dropped to $90 million this season. However, the league decided to keep the $109 million cap artificially this season, incrementally increasing it over the next three seasons to offset the losses caused by the pandemic.

People rarely expect to see cricket mentioned in an article about the richest sports leagues in the world. You expect your NBAs, MLBs, and Champion Leagues in there, but surely not cricket, as it’s not the most popular sport in the world. Well, since cricket is actually popular in India, a country of nearly 1.4 billion residents, the sport does have a massive audience to support it.

The Indian cricket league is called the Indian Premier League (IPL). It consists of only eight teams for now. However, the league manages to generate eye-watering amounts of revenue thanks to – you’ve guessed it – broadcasting rights.

Thanks to the yearly deal with Star India worth $491 million, the IPL has managed to amass quite a revenue stream. However, the league has been in danger of falling off the highest revenue sports list due to the possible COVID-related cancellation of the 2021 season.

However, the IPL 2021 is still set to go, with all eight professional sports teams playing the league in the United Arab Emirates. While there won’t be revenue from gate fees, broadcasting rights and sponsorship deals should see the league through this season.

League yearly revenue: $4.37 billion (down from $5.09 billion in the previous season)

Next up, we have the NHL – the National Hockey League. You’d be hard-pressed to find a season during which it wasn’t among the most profitable sports leagues in North America. While undeniably rich, the NHL’s revenue portfolio does differ slightly from the other USA leagues we’ve covered here.

Unlike in other leagues, a larger portion of the NHL’s revenue stems from ticket sales. This isn’t surprising when you take into account that the average ticket price for NHL games moves between $100 and $300.  In the 2019-2020 season, gate receipts made up 35.07% of total league revenue. This a smaller percentage than usual, as the season encompasses the COVID-impacted period when ticket sales were reduced.

During the same season, the NHL’s total revenue amounted to $4.37 billion – a decrease from 2018-2019’s $5.09 billion. When ranking professional sports leagues in the world by revenue, the NHL is still placed high, but the pandemic’s impact did take its toll. In a regular season, tickets, sponsorship, concessions,  and parking account for 70% of the revenue.

Last year was the first time NHL teams faced a decline since 2001, with the average value of an NHL team falling by 2%, down to $653 million. However, the new media deal that will provide $625 million per year, starting from the 2021-2022 season, might be the saving grace for keeping the NHL among the most popular sports leagues in the world. Currently, the NHL has no teams in Forbes’ top 50 list.

In fifth place, we have the well-loved English Premier League – the UK’s favourite pastime next to bingo games. Considered the pinnacle of European football by many, the Premier League unsurprisingly draws in most viewers per match compared to other football leagues.

It’s also one of the most profitable sports leagues, raking in £2.884 billion in the 2020 season. Just like practically every other professional sports league or tournament, the Premier League suffered losses as a result of the pandemic.

The Premier League experienced a 9% drop in turnover compared to the 2019 season when the yearly revenue was £3.3 billion. According to the league’s own report, the decrease in revenue is  ‘largely due to the rebates payable to broadcasters following a suspension of play during the season.’ The so-called cost of sale also went down by 10% due to smaller fee payments to clubs. According to professional sports revenue statistics, the English Premier League did receive some help from the UK government – £3.3 million.

Besides being one of the top soccer leagues, the Premier League is home to a few of the most expensive sports franchises. Valued at $4.2 billion and $4.1 billion respectively, Manchester United and Liverpool took 11th and 12th place on Forbes’ list of most valuable teams. Behind them, sharing 13th place with the LA Rams, is Man City with a $4 billion valuation. This should put a bit more context into how the Premier League ranks so high among the most profitable sports leagues compared to other soccer leagues and why nearly every good betting site holds specialised Premier League offers.

The sixth place on our list is also held by an American league – Major League Baseball (MLB). Like the NFL, MLB’s multi-billion yearly sports revenue is largely a result of highly profitable TV airing deals with sports networks. While definitely being one of the most profitable American sports leagues, the baseball league took a colossal revenue hit during 2020.

MLB generated around $10.5 billion in profit during 2019. However, the COVID-19 pandemic more than halved the league’s yearly revenue, bringing it down to less than $4 billion in 2020. Additionally, the wages of MLB players fell by $2.5 billion in total during the same year.

However, again in line with the NFL, MLB signed a lucrative TV airing deal that will bring the league $1.84 billion a year – a 19% increase over the previous agreement. Additionally, MLB teams actually increased in value during 2020, despite the pandemic hindering the league. The New York Yankees are second-placed among the 50 most valuable sports franchises, with a valuation of $5.25 billion. Major League Baseball team values have historically increased even during recessions, and it’s no different this time around. Next to the Yankees, five more MLB teams are among the top 50 franchises rated by value.

What is the richest sports league in the world?

The NFL is the richest sports league, with 26 out of the top 50 wealthiest teams hailing from its ranks. The NFL is a highly profitable league overall – if you landed a place in it, it would be more lucrative than winning a jackpot on slots.

Which sports league is most profitable?

Drawing from revenue by sport league data, the richest league is NFL, despite a $4 billion drop from the previous season due to the pandemic. In 2020, it banked $12 billion.

Is baseball a dying sport?

While there’s something to be said about baseball’s overall popularity and how the sport lost its aura of near-religious reverence, the professional baseball sector is alive and well. Like the other national leagues, MLB did take a huge revenue hit caused by COVID-19, raking in a bit less than $4 billion in 2020 (down from $10.5 billion).

Is the NBA losing money?

The NBA firmly holds its place among the most profitable sports leagues, but it did lose 10% of its pre-COVID revenue. However, it still managed to generate $8.3 billion during the last season and increase the value of its teams six-fold over a decade.