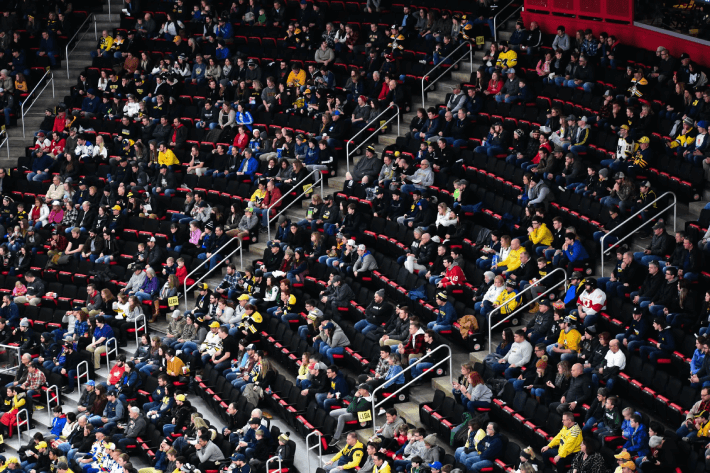 Sports play an important role in many people’s lives and have always been popular among UK viewers. In fact, many sports have originated in the UK, including cricket, rugby, and golf. Nowadays, some major sporting events occur across the UK stadiums, such as the Millennium Stadium in Cardiff, Wembley Stadium in London, and Anfield Stadium in Liverpool.

To demonstrate the love and passion UK fans have for sports, we’ve made a list of sport viewership statistics in the UK. Read on to find out some fascinating facts that you may not be familiar with.

1. 7.6 million people watched the Six Nations Championship match between England and Wales in 2020.

The Six Nations Championship rugby match between England vs. Wales was the most-watched sporting event on television in 2020 in the UK. Around 7.6 million fans enjoyed the game in which England triumphed over Wales 33-30 on March 7, 2020.

Rugby is one of the sports that draws its roots from England. It is believed that it originated at Rugby School in Warwickshire, England, back in 1823. The legend says it all happened during a game of football when William Webb Ellis decided to pick up a ball and run with it. Even the  Rugby World Cup Trophy is named after the man, despite the dubious validity of that origin story. According to sport viewership stats for the UK, the number of rugby enthusiasts keeps on rising, making rugby one of the most popular recreational and professional team sports in the UK.

2. The total attendance for professional UK sports reached 75.1 million in 2019.

The overall attendance for professional UK sports reached its peak with 75.1 million spectators in 2019, which was a significant increase compared to 74.6 million from 2018. Based on the report issued by the sports marketing agency Two Circles,  attendance for professional UK sporting events had stats that genuinely make the mind boggle. Let’s put it this way: the UK is the only country in the world whose yearly sports attendance figures were larger than its total population. Football was the main contributor to these numbers, with 50.5 million fan visits in 2019. The record attendance in live sports events contributed £11.8bn to the UK economy.

3. The Grand National 2021 hit the second-highest ITV viewership in history with 8.8 million viewers.

Earlier this year, Rachel Blackmore became the first female jockey to win the steeplechase with Minella Times, and 8.8 million viewers tuned in to witness it. Although the odds were 11/1, and Blackmoore was the third favourite with most betting sites, she managed to triumph in this historic race. According to UK sport viewership numbers, the record viewership for the event was 9.6 million in 2019.

The history of The Grand National festival goes back to the early 1800s. It all started in 1839 when Lottery became the first winner of the Grand Liverpool Steeplechase, now known as The Grand National. Today, horse racing is the second most viewed sport in the UK that generates billions of pounds for the UK economy.

4. The 2019 Men’s Cricket World Cup was the most-watched ICC event ever.

Ever since it started its journey in England back in 1975, cricket has been one of the fan-favourite sports all across the country. Global viewership stats confirm that the International Cricket Council (ICC)’s  Men’s Cricket World Cup 2019 had a cumulative average audience of 1.6 billion worldwide, making it the most-watched ICC event in sporting history.

Fans also watched the Cup for the longest amount of time since it was first established. A record was set with 13.7 billion global viewing hours, while  India vs Pakistan became the most-watched match with 273 million individual viewers.

The cumulative average audience watching Wimbledon in 2021 has almost doubled compared to the figures from 2019. Just two years ago, 8.4 million fans enjoyed the first three days of the championship, whereas stats show that there were 15.5 million of them during the first four days of coverage this year. When it comes to global viewership by sport, tennis still trails the likes of football, basketball, or cricket, but it’s doing fairly well in England.

Wimbledon is the world’s oldest and one of the most prestigious tennis tournaments. Since 1877, It has been held at the All England Club in Wimbledon, London, on outdoor grass courts. Wimbledon is one of the four Grand Slam tournaments, next to the US Open, Australian Open, and French Open.

Around 30.95 million viewers have witnessed the heartbreaking penalty shootout between England and Italy at Wembley Stadium in the Euro 2020 final. Based on the live sport viewership in the UK figures, an average of 29.85 million people watched the whole game, with 30.95m tuning in during the penalties. If you combine the broadcasts on both the BBC and ITV, the TV audience surpassed the number of people watching Prime Minister Boris Johnson’s statement about the coronavirus restrictions and the funeral of Diana, Princess of Wales, in 1997.

The Premier League was founded in 1992, and this is the first time live games were free to watch on Pick and BBC. According to the sport championship viewership statistics, the derby between Liverpool and Everton on June 21, 2020, broke the record and became the most-viewed Premier League game in the UK with over 5.5 million viewers. Just two weeks later, the record was broken again when Southampton competed against Manchester City in a match that 5.7 million viewers across the UK enjoyed.

8. 94% of UK viewers who watched the 2020 Olympics in Tokyo planned to watch athletics.

The delayed Tokyo 2020 Olympics finished with a closing ceremony on August 8. In total, it hosted 33 sports and 339 separate events. Based on the research by YouGov, UK viewers were most interested in athletics, with 94% of them intending to watch the queen of sports events. Olympic viewership by sport stats show that 79% of viewers were interested in watching swimming events, and 65% intended to watch rowing. Athletics was the largest single sport at the Olympic Games, and it is divided into track, field, and road category events.

Based on the viewing figures, 4.8 million UK viewers watched the season-opening Austrian GP on July 5, 2020. This marked a 25% increase compared to the previous season, which had 3.84 million viewers in total.

As per stats on professional sports viewership in the UK, the Hungarian GP also saw a growth of 4% among the UK viewers. 4.42 million viewers tuned in to watch the 2020 Hungarian Grand Prix, which took place on July 19. The Styrian Grand Prix at the Red Bull Ring in Austria attracted a further 4.4 million UK viewers.

England’s 4-0 triumph over Ukraine was watched by 20.9 million UK fans. Based on the total viewership by sport for the UK numbers, this was the second most-watched live TV event of the year, right behind the England vs Italy final match. Combining the TV views on the BBC and those recorded on online streams, we get around 26.1m viewers, making it one of the most-watched UK sports broadcasts of all time.

BBC’s coverage of the Olympic Games 2012 attracted a total of 51.9 million people. Each of them spent at least 15 minutes watching the Games on BBC One. As the BBC announced, 24.2 million people watched at least 15 minutes of coverage via the BBC Red Button, making it 42% of the UK population. As per UK sport viewership statistics, the Opening Ceremony engaged 27.3 million viewers, while 26.3 million of them watched the Closing Ceremony on August 12, 2012.

12. During the first three weekends of coverage in 2020, the NFL experienced an 8% increase in the number of UK viewers.

During that time, the NFL saw a 54% year-on-year increase in audience engagement in the UK. Sky Sports reported its best daily viewing figures on October 4, 2020, stating that more than 14 million people watched an average of 95 minutes of coverage. The surge in numbers happened right after the broadcaster signed a five-year deal with The National Football League.

The NFL is a professional American football league, and according to global viewership by sport stats, the average US TV viewership of an NFL game in 2020 was 14.9 million viewers. The NFL consists of 32 teams, and the league is the most-watched professional sports event in the United States.

13. Only  29% of people in the UK were interested in watching the Olympic Virtual Series eSports events.

Earlier this year, the International Olympic Committee (IOC) made a historic move when it decided to launch the first-ever Olympic Virtual Series. Although this is the first time the eSports competitions will be part of the 2021 Summer Olympics, only 4% of UK fans were “extremely likely” to watch the events. According to sport viewership statistics for the UK market, a hefty 43% of the survey participants said they are unlikely to tune in for the Series, with another 28% claiming they are “not very likely” to do so.

In total, there were  five different categories for virtual disciplines at the Games:

From what the TV viewership by sport figures have shown, 300 million people worldwide tuned in to watch the “Fight of the Century”. This year marked the 50th anniversary of the first fight between Muhammad Ali and Joe Frazier. On March 8, 1971, 27.5 million UK fans held their breath while Frazier handed Ali his first professional career loss. Ali got his chance for revenge in the following years as he triumphed over Frazier in 1974 and 1975.

As ESPN noted, the Fight attracted about half of the UK’s population at that time.

What is the most-watched sport in the UK?

What is the most popular female sport in the UK?

Netball is the most popular women’s team sport in the UK, and although it was never featured at the Olympics, its popularity is on the rise all across the country.

What is the fastest-growing sport in the UK?